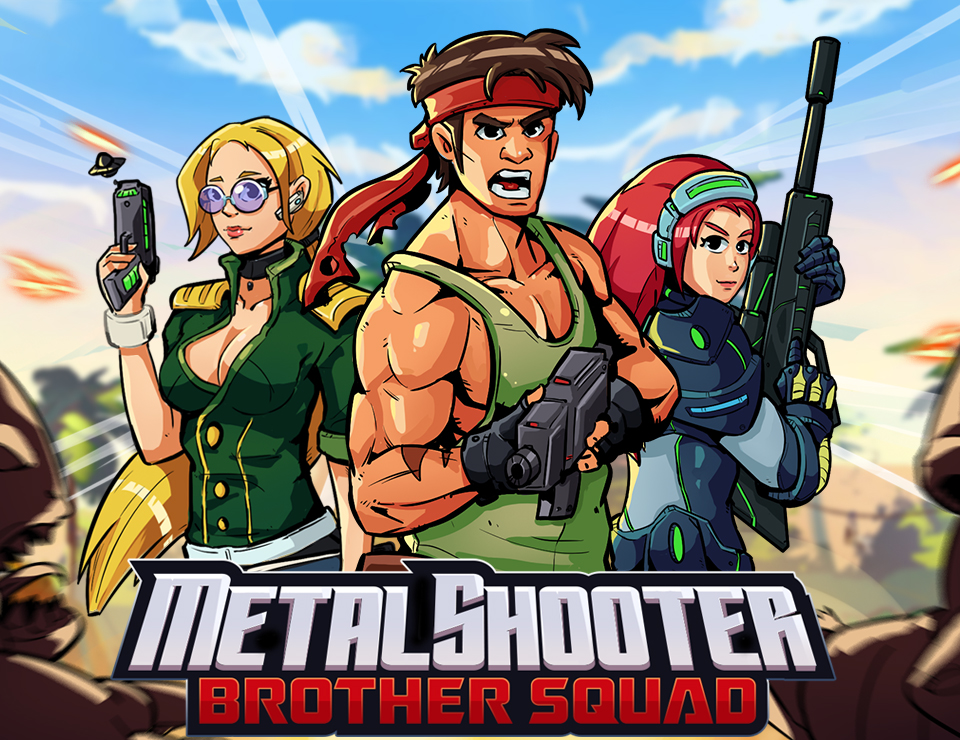 Brother Squad – Metal Shooter proudly in top action games to play of GamesKeys.
Action games are one of the most popular games on any platform. Thousands of action games are published on daily basis, so sometimes some excellent games goes through under the radar, and they don’t get the appreciation from the users that they deserve, that is why we have created this list specifically to target those games, hopefully these games will keep you busy for the whole year.

The year is 2039 and the planet has recovered after the events of Reflex Unit 1. Life seems safe, until a new larger army of remote control drones suddenly attacks strategic cities around the globe.DOWNLOAD ON GOOGLE PLAY

Wild League games take place in an outdoor natural arena where two groups of wild, heavily-armed animals fight for water in 3х3 Top-Down shooter. Protect yourself from wolf packs attacking your territory, keep enemy claws off the water in the center of the map, and don’t let other players collect bottles of water.DOWNLOAD ON GOOGLE PLAY

Put your finger on your character, drag your finger forward and aim at the target, the farther you drag, the more speed you get. Sounds easy? It’s not! You have to make sure to get the perfect glide, so max speed is not always a winning concept!DOWNLOAD ON GOOGLE PLAY

Psycho Girl, Hacker and Little Square Face battle in the world of Ender. Fight the mobs and creatures and try to stay alive in a fun packed survival game. Advance in the 7 level worlds of Enderville, Ender PLaza, HoHo Village, Redne Mines, Elevator Power and Ender Realm. Keep your highest ranking score and try to beat it.DOWNLOAD ON GOOGLE PLAY

Earth is different now. An unknown epidemic nearly wiped out humanity, dooming it to an eternal struggle for survival. Almost the entire population was turned into bloodthirsty zombies. The apocalypse struck and cities were overrun with the walking dead. The military dropped nuclear bombs in the most infected areas, but it was too late. The epidemic was out of control. All hope was lost.DOWNLOAD ON GOOGLE PLAY

VTOL aircraft Rivals forces are threatening to invade the country from the sea and take over the shoreline. Warships fleet and cobra helicopters are getting closer and closer to land, putting the nation into real danger of apache combat strikesDOWNLOAD ON GOOGLE PLAY

Autisarian Run is an endless 3D runner game, it was created by an autistic boy who accidentally found the ability to write complex code from memory. He uses his game to block out the negative effects of autism. DOWNLOAD ON GOOGLE PLAY

Engage in gruesome combats with various fighters to win your way back to glory in this ultimate fighting game. Enjoy different punch, kick, dodge, and special power moves. Unlock achievements and compete with your friends for high scores. This fighting game has amazing 3D graphics and high-quality music and sound effects.DOWNLOAD ON GOOGLE PLAY

It is a sinister roller coaster ride through the dark scary horror asylum. Try to find keys and weapons or tools to succeed the mental hospital residence. Better be prepared for jumpscares, screams and puzzles, the evil is resident in these halls!DOWNLOAD ON GOOGLE PLAY

Zombie’s Got a Pogo

The goal of this game is simple – avoid accidents as you try to reach farther than other zombie ragdolls on each new round! It’s an endless jumping game with bone crunching ragdoll physics set in a fun but dangerous world! Bounce your way to the top of the leaderboards and follow the trail of brains and tune up your zombie mannequin with collectible items and accessories!DOWNLOAD ON GOOGLE PLAY

Using various heroes with different abilities, you can play various roles in battlefields such as ‘Assault’, ‘Deathmatch’, ‘Escort’ and ETC. Each hero can be raised individually, they also have own ‘ranking’, ‘weapons’ and ‘skill’.DOWNLOAD ON GOOGLE PLAY

Move with Stick. Attack, Jump and Eat Cupcake with Buttons. Turn Camera Around by Sweeping the Screen.DOWNLOAD ON GOOGLE PLAY

Can your fingers catch the speed of the ninja? A great adventure will start to take back a stolen scroll! Many obstacles, including evil ninjas, ninja dogs, monsters, demi-humans, zombies, traps, castles, dungeons, will prevent your adventure!DOWNLOAD ON GOOGLE PLAY

FPS Sniper 2019 is the latest action sniper shooting game with exciting new features and mechanics. Get ready to step into the shoes of a specially trained sniper soldier who is assigned all kinds of target missions to take out people that are danger to the society.DOWNLOAD ON GOOGLE PLAY

Choose your commando or mercenaries trying to finish their mission to save the world, then go home and take a well-deserved nap.DOWNLOAD ON GOOGLE PLAY